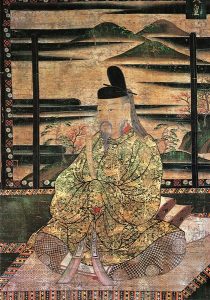 We can’t be sure if he was really the first one to drink it, but he was an admirer of Chinese culture and showed great support for tea.

Emperor saga abolished the death penalty in 818, it wasn’t until 1156 that it would be re-instituted. Under his rule the times were relatively peaceful, and the arts flourished.

He was an expert calligrapher, being included as one of the Sanpitsu (三筆, three brushes). This title was given to 3 outstanding calligraphers in the Heian period. The other two were Kūkai and Tachibana no Hayanari (橘 逸勢).

Being a scholar of the Chinese classics, he wrote Chinese poems too. He even held imperial poetry competitions.

The emperor and tea

According to the Okugishou (奥義抄) book, emperor Shoumu (聖武天皇) drank tea in the year of 729. However, this book was written around the year of 1100! As a result, its veracity is largely dismissed.

The first reliable account of tea drinking in Japan is written in the Nihon kouki (日本後紀), citing the year 815 and Emperor Saga. Below is the actual passage, with explanations in parenthesis:

Since it’s ancient Japanese I can’t really read it, but notice in the second to last sentence the characters 煎茶, which is the modern Japanese word for sencha. It doesn’t mean that Emperor Saga drank sencha, because at that time tea was pressed into cakes, and the process to make sencha wasn’t invented until hundreds of years later.

What it basically says is that on the year of 815, Emperor Saga visited the Suufuku temple and worshiped the Buddha. Then he visited the Bonshaku temple and the highest-ranked monk, Eichu (永忠) offered him tea that he himself had brewed.

As you can read on my article about the history of green tea, two Buddhist monks, Kūkai (空海 ) and Saichō (最澄 ) had previously brought tea seeds from China. The tea plant was already cultivated in Japan because of this (although at a small scale), and Emperor Saga personally knew these two monks. Therefore, this was probably not the first time that he had tea.

Some months later, Emperor Saga ordered that tea plants be cultivated in the capital. Tea was even planted inside the precincts of the imperial palace!

Although tea wouldn’t become popular in Japan until much later on, this was the first imperial effort and I’m sure that it made a difference in the history of tea in Japan.

Unfortunately, Emperor Saga had financial troubles. There where a lot of droughts and the fact that he had many concubines and 49 children didn’t really help. He was forced to abdicate in 823.

The Development of Chinese Tea Culture and its Early Spreading in Medieval Japan, Xu Jingbo (in Japanese)