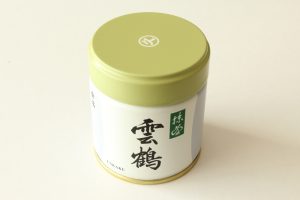 This matcha is the first tea that I bought during my recent trip.

I started drinking matcha every morning a few months ago, and I may have become addicted.

That’s why I definitely wanted to bring a matcha from Japan.

Unkaku (雲鶴, cloud crane) is the fourth matcha out of the ten available in the main lineup from Marukyu Koyamaen.

That means that the company sells three more matchas that are of higher quality than this one.

Unkaku comes from Uji and it is also suitable for preparing koicha.

The matcha has a deep, creamy aroma which is very pleasant. Unlike other matchas I’ve smelled, it seems less sweet.

To open it, I pulled the seal. It’s similar to a soda can.

However, when I opened it, it sort of exploded!

Quite a bit of matcha came out and made a small mess. I’m not sure why this happened but it was funny 🙂 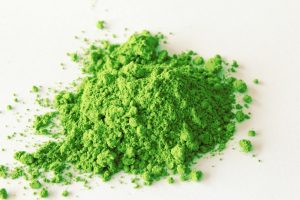 The color of the powder is bright green. All seems well so far.

Marukyu Koyamaen says that one should use 1.5 grams of matcha and 70 ml of water.

I agree with 1.5 grams in two scoops of the chashaku (matcha scoop). Each scoop is commonly referred to as approximately one gram, but I have never obtained a full gram once I measure it.

I added the two scoops of matcha to the matcha bowl, and after pouring the water I began to whisk. 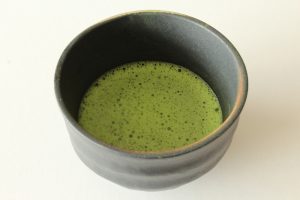 It felt effortless, although by the time I took a good picture the foam had receded.

It still had a good appearance.

The taste of this matcha is rich, with not much bitterness.

I didn’t feel much dryness in the aftertaste, it felt light.

This tea’s seaweed taste is stronger than the general sweetness but in a good way.

It really is delicious and easy to drink.

A high quality matcha with an appropriate price. I’ll be enjoying it daily while it lasts.