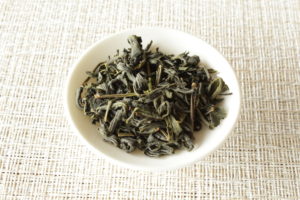 Many thanks to Ippin for giving me a sample of this interesting tea.

The brand is Kawamotoya. It’s the first time that I try it.

This lightly oxidized oolong is made in Makinohara, Shizuoka prefecture.

I have little experience with Japanese oolongs, because they aren’t very common.

This is a good chance to learn more about this type of tea.

The tea leaves have a slightly sweet and fruity aroma. Definitely different from a Japanese green tea.

It consists of medium sized leaves that are quite twisted.

Their color is grey-green, and there’s a roughness to their texture.

Finally, there are some stems present.

I prefer the gongfu style to review oolongs, which means using a gaiwan and making short infusions of about 30 seconds.

After the first infusion, I tried to describe the aroma of the wet leaves but I just couldn’t identify it.

It seemed very familiar, but also so unusual for a tea.

Then it came to me, it smells just like an eggplant! I’m pretty sure that the tea leaves smell just like it. 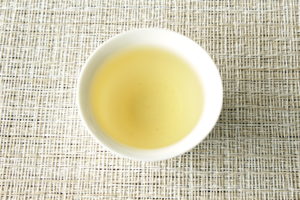 The liquor is a clear yellow. It looks good.

I tried to forget about the eggplant, and concentrated on the tea’s taste.

It’s a mellow flavor, with a faint sweetness. I think that it might be a bit light.

Although this tea is much different from what I’m used to drinking, it has a pleasant taste.

For the second infusion, I found that the taste improved in the sense that it was stronger.

The third infusion resulted in a yellow color, brighter than before. Taste-wise, it was similar to the second infusion.

The next two infusions were also very much alike.

It was at the sixth infusion that I decided to stop, because the flavor was much lighter.

But overall it is a good tea with no bitterness or astringency. It also offers a fresh aftertaste.

While I still prefer a Japanese green tea, this tea has such a curious aroma that I will definitely reserve a space for it in my collection to share with friends.

Here’s the product link. I had a lot of fun while tasting it 🙂